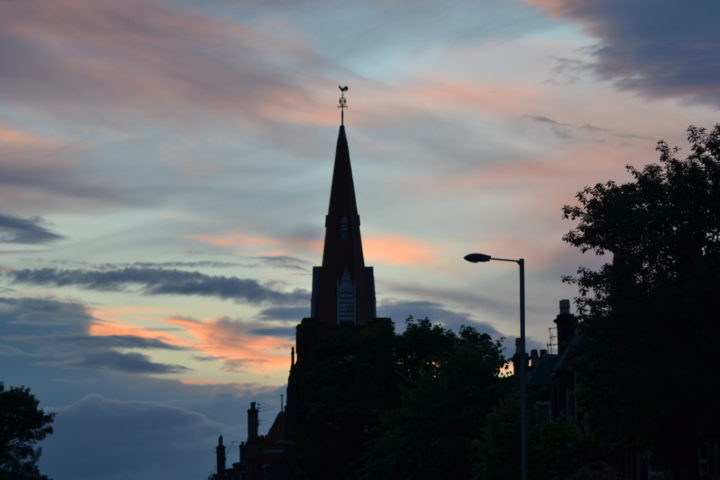 The name ‘John’ has much importance in the Manse family.
On one side, my side, I have cousins called John; an uncle baptised John but was called Ian; and as you know, a boy called John. Pamela’s father was called Johnny; my favourite Gospel is John and to the delight of my youngest one in our deep and meaningful conversations on the way to school, Je-sus most beloved disciple was also called John.
I want to tell you about another John.
He was primarily a friend and work colleague of Pamela’s and ran a signage company where appropriate, clear signs were created to help people with Dementia. Neither Pamela nor I held it against John that he was a Motherwell supporter and we had the privilege of attending his daughter Jordan’s wed-ding…
… though John was not there.
John had, like Fernando Ricksen, the Dutch Rangers player, Motor Neurone Disease, and my thoughts drifted back to Michele his wife and his lovely family when Fernando Ricksen gave up his fight and died recently. There have been plaudits both from the Celtic fans who put tributes on the Rangers’ gates and likewise by the Rangers fans who were horrified at comments made to Scott Brown about his sister who had died.
Bill Shankly is often quoted or misquoted about football being “more important than life and death” the wrong way but thank God there are times we can rise above bitter rivalry and that which separates us, and realise our common humanity. From a religious perspective, we are all children of God.
That for me, is always my de-fault position when someone irks me, frustrates me or hurts me. Like it or not, they belong and if they belong to God, they belong to me.
Pamela’s father, Johnny, often used to tell of some fiery Kirk Session Meetings that he attended as a Church Elder but at the end of the meeting, the question from him “Who needs a lift home?” was often heard.
Yes, disagreements happen, yes, we see from our perspective, but whether common ground is reached or not, whether more heartfelt communication and conversation is needed, we must remember that which we have in common and brings us to-gether and how important it is to understand from a new angle and stand in someone else’s shoes.
What I saw in John Perry, Pamela’s friend, was one of courage and good humour, a man full of welcome, who despite his condition the first words out of his mouth were “How is George?” and for Pamela a closeness to John and his family, a crossing and a special place in ill-ness to be there and journey with him.
When will we ever learn to cross that which divides us?
We are conscious of it in a country that it is pulled in many directions politically. If we open our eyes honestly, we see the division in wealth and we see the Church as it tries to grapple with the need to change and the reluctance of some to accept it.
For all his efforts, I commend Fernando Ricksen.
For John, a friend who thought of others before himself.
To that beloved disciple who entered into a new relationship at the foot of the cross as Jesus crossed the divide, I think of all today.
Autumn is a time of change, of fallen leaves and fallen lives –
but we know that “Love is come again, like wheat that springeth green.”
Your friend and minister,
George